Another week has passed, where is Squeeze? Sadly, I did even less than the week before, but here is the log anyways:

That's all. Sorry, I had a busy week.

Let's join gregora and zack (and others, too lazy to search for links/names) and fix some RC bugs in Debian!

So what happened last week?

What does that mean? Two bugs are (almost) closed, two need more work. And this leads me to a feature I miss from http://udd.debian.org/bugs.cgi: a comment field as http://bts.turmzimmer.net/ has it. Will ping lucas about this later today.

The month is coming to an end, and I'd like to recommend you some things on flattr.com :)

BitlBee The IRC geek's solution to instant messaging. Tunnels instant messaging traffic (supporting all popular IM protocols and Twitter) to a virtual IRC channel and virtual IRC queries. Can be installed locally, but also available as a public service for people who can't/don't want to install it.

phpMyAdmin phpMyAdmin is a tool intended to handle the administration of MySQL over the Web. It can create, rename, and drop databases, create/drop/alter tables, delete/edit/add fields, execute any SQL statement, manage keys on fields, create dumps of tables and databases, export/import CSV data, and administrate one single database and multiple MySQL servers.

Debian Backports Over the last years I did numerous backports for Debian and also run backports.org. Since September 2010 we moved backports.org to backports.debian.org so its an official

Some words on these things:

If you do not play PokerTH yet, you might want give it a try :)

PokerTH 0.8 was released a couple of days ago. The most exciting feature of this new release is the online ranking feature: you can register at poker-heroes.com and login with these credentials in PokerTH, now your games will be logged and you might reach place 1 at the ranking site.

However, you won't see 0.8 if you do not have experimental (for Debian) or the pkg-games PPA (for Ubuntu) in your sources.list. As the release is only a few days old, it won't be included in Squeeze or Maverick. Sorry for that. But I plan to provide needed backports as soon they are needed (currently experimental and PPA should be sufficient, tell me if they are not).

As written above, 0.8 won't be shipped in Squeeze and Maverick, but 0.7.1 will be. With the release of 0.8, upstream has moved their server to 0.8. This means that Debian and Ubuntu users won't be able to play internet games on the official server (as long they did not install 0.8). I've set up pokerth.debian.net running 0.7.1 and have just uploaded 0.7.1-2 which uses this server as default one to unstable (sync to Maverick will follow in a couple of hours). However, default means default on new installs. If you have already played PokerTH, you have a ~/.pokerth/config.xml with the upstream server in it and you have to change this if you want to play on my server. Please read /usr/share/doc/pokerth/NEWS.Debian.gz for this:

Sorry for that and enjoy nice flops and raises :) 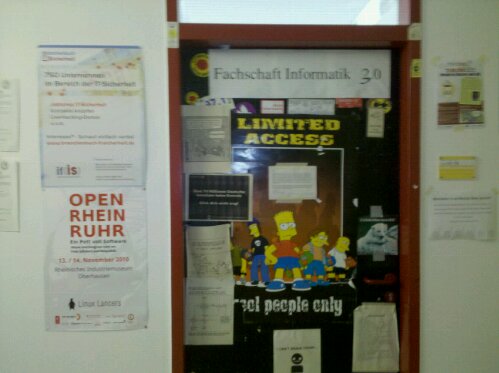 Still, I won't tell you the name of the software (but you could easily guess or check...)

So let's put the grey hat on and begin ;)

Foreword: when I write spam-filter, I mean some DNSBL/SPF/blah filter, not SpamAssassin, crm114 or other content-based filters.

There are plenty of spam-filters out there which work after the following schema:

Here some_magic is a function that do the actual checks (DNSBL lookups etc) and which stores possible happened errors in errors. If an error occurred, it's safer to say the mail was good (or at least not bad) than bad.

This looks like a sane approach on the first sight: iterate over all checks and execute them until a mail is found to be spam (and the corresponding check did not end up in an error (imagine some weird DNS error for DNSBL or SPF checks here)). But then the author realizes that the errors might be "global", like with DNS: when the first check notices that it can't resolve anything (ie. it ran into a DNS timeout three times in a row), the second check (which also utilizes DNS queries) will most probably result in an error too. After this he adds a global counter for DNS errors and skips all the checks that use DNS if this counter is >=3. "Great idea", you say, "saving resources is good". "Bad idea", I say...

The reason is simple: DNSError != DNSError. Why? The local resolver might be broken, then every DNS query will end up with an error and DNS-based checks should be really disabled. The first three (out of eg. ten) DNSBLs might be down, but that's not a reason to skip the other seven and the SPF check. Etc...

Now let's assume all configured DNSBLs are working properly, so is the local resolver and the checks are:

How could one attack this filter?

Set up the following zone

What happens? The spam-filter tries to resolve client1.spam.example.com in check_HELO to check whether the hostname matches the IP-address the connection is coming from, fails three times (there are no reachable DNS servers in 10.0.0.0/8) and continues with the next two checks, but these are skipped because of previous DNS errors. As no checks could identify the mail as being spam, the mail is delivered to the users mailbox.

With some creativity this can also be used in SPF records (via spam2.example.com), sender-domains etc.

If you want to save resources by skipping DNS-based checks after another (DNS-based) check failed - don't! Think whether this is really the same error you are seeing...

Additionally this can be used as a sort of DoS against the not said software: according to the logs each of my tries needed between 30 and 36 seconds (!) to complete - imagine some hundred simultaneous requests...

You think I did something wrong with that post? Throw the first stone then, I don't care.

I must admit, I do not really get the point of the ongoing discussion about having an "official" Facebook page. In my understanding it should be a source of information about Debian for Facebook users, technically a mirror of www.debian.org/News and debian-devel-announce@lists.debian.org.

Yes, Facebook is a piece of non-free, data-harvesting sh*t. But there are users, maintainers and developers who use that service (they also use Twitter, Xing, Linkedin, StudiVZ, MeinVZ and so on). Why should we prohibit them to have an official source of information on their platform? If there is someone who wants to run that kind of service: go for it! Or would we prohibit someone to run a mirror of ftp.debian.org on a Windows machine just because the surrounding environment is non-free¹? Most probably, that wouldn't be an official mirror listed on www.debian.org/distrib/ftplist, but it would still contain the official set of packages, signed with the official key of the archive.

And please, do not compare this situation to SourceForge, GitHub, Google Code etc. It's just not the same! On SourceForge etc one relies on a non-free service as the primary way of distribution (that's not perfectly true for DVCS based services, as here one can push the tree to every service one has access to). On Facebook we'd just have a mirror of the already "freely" available information.

¹) do not forget: almost every machine used for hosting/developing/whatsoever Debian has non-free hardware, firmware etc!

So I got SVN access to plugins.svn.wordpress.org, but I hate SVN. Let's just use Git instead of SVN, especially when I already have my plugin as Git on github.com :)

(note the -r283636 - it's very important, if you ommit it, git svn will fetch 280k revisions which takes ages, if you put it to something AFTER your repo was created, the log will be b0rked*)

Done! Now you can work as usual, push to github and commit to svn via dcommit :)

PS: Dear WordPress.org Team, you have working SSL, why do you still have http-links in your mails?

*: You can find the revision you need by looking at http://plugins.trac.wordpress.org/log/statusnet-widget/ - you need the one when plugin-master created your repo :)

Thanks nplus for reminding me about this on XMPP :)

As you may not have noticed, I migrated my site to WordPress some time ago as I did not want to maintain the old piece of crap I wrote myself when I was "young" ;)

Today I want to tell you a story of the development of a plugin for WordPress.

As the title says, it's much about joy and pain and I think I should start with the pain :)

WordPress is written in PHP, so are the plugins for it. And PHP is REAL pain (but there is no decent blogging software for Django or Zope that would fit all my needs). It is especially pain when you work with Python every day. What the heck are those curly braces and dollar signs and "$this->"? That's just not the way Guido indented it ;)

Additionally my last contacts with PHP were some time back in 2008 when I hacked on SysCP, which today result in commits like this:

But I have to admit that the WordPress API is pretty good. Not very well documented (the wiki pages at codex.wordpress.org are sometimes outdated), so you have to read the source and google a bit, but when you found the needed sources, it's pretty straight forward.

My plan was to write a simple widget, displaying my Twitter and identi.ca timelines. Yes, both together, not one widget per service. The reason for this is the fact that I mostly post via identi.ca and the messages get synced over to Twitter and only the local replies and retweets/redents differ.

The basic WordPress widget would look like this (source: http://codex.wordpress.org/Widget_API#Developing_Widgets_on_2.8.2B):

One only has to modify the widget() function and here you go.

From some other Twitter plugin I knew that I only had to include rss.php and call fetch_rss(url) for every feed URL to get the timelines as an array via MagPie. But when looking at rss.php, you notice the deprecation message in the header, saying one should use SimplePie now. Some google later I knew that I had to include feed.php and call fetch_feed(url) to get a SimplePie object representing the feed contents. But SimplePie is even cooler: I can call fetch_feed(array(url1, url2)) and get a merged feed, containing both.

Now I added a duplicate filter to elliminate the messages posted to both, twitter AND identi.ca and my widget was ready.

Well, FrOSCon is over and it's time to sum up the event a bit.

First of all: it was great! But it was also hot (I heard the air-condition is off during week-ends...) and busy. And still, it was great! :)

Why? Mostly because of the people of course! It was esp nice to meet Rhonda in person (almost all other people [except the grml ones] in the Debian-and-Friends corner were the usual suspects who you see at every (big) FOSS/Linux event). I had some nice chats with Enrico (about Geany and Xfce) and Leo (about bley), besides of the usual "when will Squeeze be released?" and "how does X work in Debian?" with random people.

When there are a lot of people, a key signing party isn't too far away. Thanks formorer for the orga! You still owe me a sig from FrOSCon 2008 ;) And if someone wonders why he/she got a sign-mail from me even when he/she wasn't at the FrOSCon KSP: I used the fact that I have to sign a lot of keys to sign even more (from the OpenRheinRuhr 2009 KSP and the BSP in Mönchengladbach at the beginning of this year [yes tg, I even signed yours, hope you liked the MIME]).

As usual I missed almost every talk I wanted to hear and end up with just one (the one about RegEx), which sadly wasn't good at all.

I guess that's all I have to say about FrOSCon. Oh wait, no, there was a questionnaire which included the question whether I'll visit future FrOSCons. Of course!

So Long, and Thanks for All the Frogs!